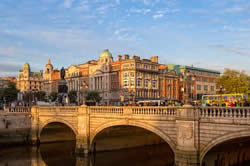 Board your nonstop flight from SFO (included).

Upon arrival at Dublin Airport, you will be met and transferred to your hotel. Remainder of the day is free at leisure to explore this beautiful city on your own.

This evening, enjoy dinner and entertainment at The Merry Ploughboy Pub. This is a must see for any visitors to Dublin city. The show is a highly entertaining performance of live traditional Irish music, song and Irish dancing. From start to finish, this is a show based on fantastic interaction between the performers and the audience. Overnight in Dublin.

Today enjoy a Panoramic Tour of Dublin City. Dublin is a city with a soul, a place that has not lost sight of the fact that people are more fun than museums and that genuine human interaction is not the preserve of small villages. Founded in 841 by the Vikings, it is a city with an interesting past. Its many monuments tell of its history. Visit St. Patrick's Cathedral, which was built in honor of Ireland's patron saint. Saint Patrick's Cathedral stands adjacent to the famous well where tradition has it Saint Patrick baptized converts on his visit to Dublin. St Patrick's is Gothic in style and its splendid interior is adorned with funeral monuments, such as The Boyle Family Memorial and the grave of Dean Jonathan Swift (author of Gulliver's Travels). Swift was dean here until his death in 1745. The Chancel has ornate stained-glass windows, and spectacular choir stalls, once used by the knights of St Patrick, adjoin the Altar. The massive west towers, house a large peal of bells whose ringing tones are so much part of the character of Dublin. Then you will visit Guinness Storehouse Brewery. Europe's largest stout producing brewery and home to the Guinness Storehouse. Opened in 1904, the Storehouse was an operational plant for fermenting and storing Guinness. Today it houses a very fine exhibition dedicated to the Guinness story. Visitors will discover what goes into the making a pint of Guinness - the ingredients, the brewing process, the time, the craft and the passion.
Dinner under own arrangements.
Overnight in Dublin.

After breakfast, depart Dublin for Waterford. On arrival in Waterford, enjoy a Walking Tour of the oldest city in Ireland. A walled city of Viking origins, it retains much of its medieval character together with the graceful buildings from its 18th century expansion. Reginald's Tower marks the city's Viking heart and the surrounding area is particularly attractive.

Then enjoy a factory tour at Waterford Crystal. The Waterford Crystal visitor center was moved in 2010 to a magnificent new home in the heart of Waterford City. A unique highlight of a visit is the factory tour which gives an up close insight into the centuries-old tradition of Waterford Crystal making. Feel the heat of the furnace and marvel at the skills of the craftsmen. The factory tour includes the following traditional production areas; wooden mold making, crystal blowing and furnace, crystal cutting and quality inspection and finishing. After the tour visitors can browse the world's most famous crystal in a lavish retail store, which houses the largest collection of Waterford Crystal found anywhere in the world. The center includes the retail store, exhibition and crystal installation areas, coffee shop and worldwide shipping facility.
Dinner (2 courses incl. tea/coffee) and overnight at your hotel in Waterford. 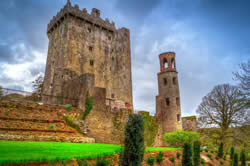 Depart for County Kerry with an en-route visit to Blarney Castle. An ancient stronghold of the McCarthy's, Lords of Muskerry, it is one of Ireland's oldest and most historic castles. Built in 1446, Blarney Castle is famous for its Blarney stone - The Stone of Eloquence, which is traditionally believed, to have the power to bestow the gift of eloquence on all those who kiss it. Many legends tell the story of the Stone, but why not kiss it and find out the truth behind the legend. Spend some time at leisure for personal shopping at Blarney Woolen Mills. The presence of the Woolen Mills during the famine shielded Blarney from the worst effects of the famine, due to its employment of local workers. The success story at the mills continued until a disastrous fire in 1869. By August 1871, the mill was once again operational with a labor force of 222. In 1976 Chris Kelleher, himself a mill worker, bought the old mill property. Within a short period of time Chris and his family transformed the mill into what is perhaps the largest quality craft shop in Ireland.

Continue to Killarney and on arrival, visit Muckross House and Gardens which is a magnificent Victorian mansion built in 1843 and is one of Ireland's leading stately homes. Built on the shores of Muckross Lake, it is beautifully situated amidst the spectacular scenery of Killarney National Park. The elegantly furnished rooms portray the lifestyle of the landed gentry, while downstairs in the basement area one can experience the working conditions of the servants employed in the house. The gardens of Muckross House are famed for their beauty worldwide. *Due to the huge popularity of this attraction this visit is subject to availability.
Dinner (2 courses incl. tea/coffee) and overnight at your hotel in Killarney.

Today enjoy touring the Ring of Kerry (166km), Ireland's most famous and panoramic route. The astonishing beauty of this large peninsula, Iveragh, comes from the great diversity of its scenery, which offers incessant contrasts. Leaving Killarney pass through Killorglin, famous for its Puck Fair, then to Glenbeigh where the cliff road affords panoramic views of the Dingle Peninsula and Dingle Bay. Continuing to Cahirciveen, you'll pass the birthplace of our National hero, Daniel O'Connell. Next, continue on through peat bogs to the town of Waterville. Continue to Sneem Village, famous for its brightly colored houses. The road then continues through the mountains to Molls Gap and Ladies View with superb views of the famous Lakes of Killarney. Killarney National Park became Ireland's first National Park in 1932 when the Muckross Estate was presented to the Nation by Senator Arthur Vincent the owner of Muckross house. It covers over 10,000 hectares of mountain, moorland, woodland, waterways, parks and gardens. A major geological boundary occurs within the Park, and this, in combination with the climatic influence of the Gulf Stream and the wide range of altitudes in the Park, gives rise to an unusual and varied ecology. Discover areas of the National Park that you might not otherwise visit. Relax as your Jarvey [driver] takes you through the magnificent scenery of Killarney National Park. The scenery is stunning and the trap will stop as often as you wish to facilitate your taking photographs.
Overnight at your hotel in Killarney.

Depart County Kerry and journey to Limerick.
Visit Molanna Dairy Farm which is a working dairy farm of spring calving Friesian cows and family pets such as ponies and a donkey. Visitors will learn about the unique social and local history while on a guided tour of the farm and experience the customs and way of life of a traditional Irish family. Continue to Limerick and enjoy a short panoramic tour of Limerick. The Vikings founded Limerick in the 9th century as a base for raiding local monasteries and Celtic settlements. It was later colonized by the Anglo-Norman who built the castle in 1210. The City at that time was divided into Irishtown and Englishtown and life was seldom calm between the two groups. Today Limerick is the main city of County Limerick and is Ireland's third largest city with a population in excess of 80,000.

Visit King John's Castle, situated on 'King's Island' in the heart of medieval Limerick City. The Castle overlooks the majestic river Shannon. It was built between 1200 and 1210 and was repaired and extended many times in the following centuries. The interpretative centre at the Castle contains an imaginative historical exhibition which tells the story of the Castle. Archaeological excavations have revealed pre-Norman settlements and evidence from the traumatic siege of 1642.
Dinner under own arrangements.
Overnight at your hotel in Limerick. 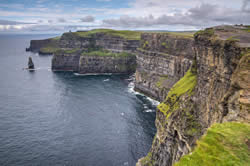 Today visit County Clare via the Shannon Car Ferry. Visit the Cliffs of Moher, situated on the Atlantic Ocean and bordering the Burren region. Standing 230 meters above the ground at their highest point and 8km long, the Cliffs boast one of the most amazing views in Ireland. The cliffs reach their highest point just north of O' Brien's Tower built by Cornelius O' Brien, a descendant of Brian Boru, to entertain his lady friends. A visit of the tower is also possible. Atlantic Edge is the exciting new interpretive centre at the Cliffs of Moher and is built into the natural landscape. The center is a huge domed cave that contains images, exhibits, displays & experiences exploring different elements of the mighty Cliffs of Moher: Ocean, Rock, Nature and Man. The visitor center has a restaurant, shop facilities and ample coach and car parking. Then travel through the Burren Region, The Burren, part of which forms the 100 square km Burren National Park, is a unique place. It is a Karst limestone region of approximately 300 sq. km, which lies in the north west corner of Co Clare. The Burren contains dozens of megalithic tombs and Celtic crosses as well as a ruined Cistercian Abbey dating back to the 12th century. You will discover small villages abandoned during the famine period and green roads on which you can walk for miles without ever seeing a car. The flora on the Burren is a mixture Arctic and Mediterranean and rare flowers such as gentian, orchids and bloody cranesbill are the rule rather than the exception. The Burren is truly an exceptional part of Ireland.
Return to Limerick.
Dinner at a local restaurant.
Overnight at your hotel in Limerick.

Depart Limerick for County Meath. En-route visit the Tullamore Dew Heritage Center Situated right in the heart of Ireland, where there is a special experience that has been waiting for you since 1829. The newly renovated home of Tullamore D.E.W. Irish Whiskey allows you to immerse yourself in the history and magic that lies inside the walls of this 19th century bonded warehouse, where its whiskey making tradition began. Enjoy a guided tour which blends audiovisual and traditional storytelling and then raise a glass of complimentary Tullamore D.E.W. Irish Whiskey. The new Visitor Center is located on the banks of the Grand Canal which was vital in allowing the former distillery to transport whiskey to Dublin for distribution around the rest of the world. Facilities include a fully licensed whiskey bar, cafe and retail shop. Coach and car parking are available at the center.
Check in at your hotel. *May not be able to check in before 3pm.
Remainder of the day and evening at leisure.
Dinner (2 courses incl. tea/coffee) and overnight at your hotel in County Cavan.

After breakfast, you will be transferred to Dublin Airport to board your flight back home.

Back to main travel page

Santa Cruz Travel is a local family owned and operated business serving you for over 50 years!

Book with us and experience why...

Santa Cruz Travel is THE TRUSTED NAME IN TRAVEL.